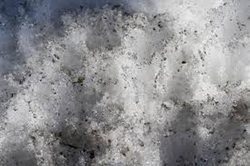 As I left the office at the end of the day and walked past the mounds that had been plowed up around the parking lot, the thought came to mind. Dirty Snow. “That’s how I feel so often, Lord.“ I found myself whispering as I trudged through the sloppy slush, “Like dirty snow.”

Yes, the morning’s pure whiteness had been spectacular and dazzling. Inches of untouched snow had been piled high on rooftops, branches, birdfeeders, and any surface able to catch the falling flakes. There was a clean freshness about the scene that is similar to how I feel after starting my day with God in Bible study and prayer.

But after the plowing and the traffic and the splashing and a daytime full of our human activity, the mounds surrounding the parking lot were no longer pure, no longer white. And neither was I.

On the drive home, My questioning mind began wondering, what is the general reason that we see snow as white? So I did some skimpy research and narrowed it down to this very basic explanation: Reflection.

Snow is an accumulation of ice crystals. Most natural materials absorb some sunlight, which gives them their color. Snow, however, reflects most of the sunlight, creating a white appearance.

Could this reflection be the very reason our Father used snow in His illustration of how thoroughly He could clean us up?
Isaiah 1:18:

The pureness will never come from within. It will always and only come from a reflection of His character upon us.

Are you struggling? Always feeling like your intentions are good and you start off strong, but then you stumble and sidetrack, and before you know it, you can relate to New Testament Paul who was wise enough to share with us that the things he should do, he did not; and the things he should not do, that is exactly what he found himself doing. (Romans 7:15-25)

My friend, hear that Still, Small Voice say, “Don’t worry. I will make you clean again.” In my mind’s eye I see God wearing mittens, approaching the mound of my messes and gently brushing away that outer layer of dirty snow. Brushing, brushing, brushing with those beautiful mittened hands that soften the work, until He has cleaned away the dirt and the inner white snow is reflecting again.

He never gives up on cleaning me up. And I promise, He will never give up on you, either!