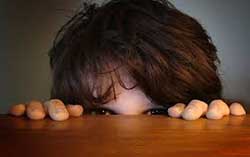 I was born with fear coursing through my veins. My earliest memory is of me, maybe age 2 or 3, with my hands in a death grip around the stairway banister screaming at the top of my lungs as my father tried to pry those little fingers apart. It was nighttime and I didn’t want to go up in the darkness to bed. I feared the night like nothing else. The fear seemed to follow me as I grew and it wasn’t just the darkness. I could give you a laundry list of things that I fear from which nearly zero of those items have ever actually harmed me.

I am also an active follower of Christ. My desire is to be different. I want to represent Christ’s character in the gentle yet powerful way that He lived His life here on earth. With that context, I do know all the verses. Fear Not! is proclaimed boldly throughout the scriptures.

The juxtaposition of these two aspects of my life, fear and faith, came crashing at my feet one evening after walking out of a place of business in time to notice a woman running very quickly quite some distance from me, yet heading my direction. Not very far behind was a man who appeared to be in pursuit of her. They seemed to be shouting. When they got close enough for me to analyze the sounds, I froze. Her tone was fear. His was rage.

As I reached my car and opened the door, the young woman, still running, reached the far side of the plaza parking lot. It was a mostly empty parking lot at this particular time and it appeared that I was the only visible human other than the man chasing her. I paused, my hand on the door. What was going on?

Looking intently across the lot, I tried to hear what was being said, but the couple was too far away to distinguish the words. One thing, however, was becoming abundantly clear. She was still ahead of him, although he was quickly gaining ground. And she was coming toward me. She wanted to reach me.

In an instant, all the thoughts and plans that had been swirling through my head concerning my evening ahead vanished as I silently became the third party in the drama unfolding before me. She needed me. I needed to run toward her, to bridge the gap. I wanted to be there for her. But even more instantly, the dreaded fear raised it’s ugly head. And this particular fear kept me rooted to my spot, unwilling to move forward.

Fresh in our collective memory as a nation are the stories of death by shooting, not as an act of self-defense, but as an act of anger and rage. Theatre shootings, mall shootings, church shootings, sidewalk shootings in this beautiful nation of ours have colluded to nurture the growing question of safety. “Where is safe?”

For someone such as myself, who struggles with fear on many levels, the constant voice of these national stories collided head-on with my instincts to help her. I was frozen in fear.

By this time, still across the lot, he had reached her and she stopped her running and pivoted to face him. A battle of words ensued and they were too far away from me to understand what was being said. But the body language told enough. Wildly flailing his arms and pointing his fingers it was clear that he was demanding that she turn back toward the direction they had come. Shouting. Gesturing. Rage.

And then, he turned on his heel and began walking back…home? The frightened woman followed closely behind appearing to be pleading to his back for some sort of understanding.

Words that only I could hear.

My favorite definition of the word Warrior is this: Someone who is willing to give up their life in order to save a life. There are those for whom being a warrior seems to come naturally. Brave and courageous, we count on them when the chips are down and hope is fading. And then there are, well…the “me’s” of this world. We flatline on the warrior-meter.

Is there hope for the braveless, shrinking hearts like mine? You bet there is.

Deuteronomy 31:6 is a good starting point. Be strong and of good courage, do not fear nor be afraid of them; for the Lord your God, He is the One who goes with you. He will not leave you nor forsake you.

Picture Jesus, the Warrior who did give up His life to save your life, holding your hand when the chips are down and hope has faded. Hear that Still Small Voice whispering, “No fear, my child. we have already won this. You just hold on tight and follow my commands and together we will handle this situation.”